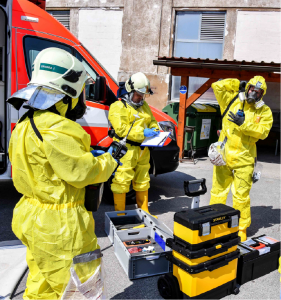 In Europe and around the world there are many vulnerable installations and critical infrastructures close to rivers, coastlines, located in earthquake prone areas or subject to other kinds of natural hazards. One decade after the Fukushima Disaster Natural hazards triggering technological disasters, or so called Natech events, are still not represented widely enough in emergency preparedness and response activities. Natech disasters as multi-sectorial emergencies pose a variety of simultaneous effects and require a high level of collaboration and coordination of stakeholders from various sectors. The river Danube region connects ten European countries and is one of the lifelines for the exchange of goods in Europe.

It is living environment for around 80 Mio. European citizens and basis for industrial production in many countries. Besides the anthroposphere the river Danube region is a natural habitat for a great variety of species protected by various national parks and European environmental protection initiatives. The cyanide spill at Baia Mare (RO, 2000) revealed the terrible consequences of a Natech event at an inland waterbody.

To improve and strengthen cooperation among European Member States in order to facilitate coordinated response to Natech events, the FORMATEX23 full-scale exercise focuses on multiple industrial accidents along in the river Danube region triggered by an intensive flooding event. The exercise is planned to deal especially with the impact of CBRN events, like toxic spills or the release of radioactive material, triggered by the flood. Union Civil Protection Mechanism (UCPM) Modules active in the filed of CBRN hazards and technical experts are going to train in a multi-hazard environment together with local civil protection and emergency response experts in the scope of a multi-national, multi-level, multi-agency exercise.

The full-scale exercise is prepared and accompanied by a tabletop exercise as well as by a thematical conference on Natech risk management and emergency response.

The project partners a combination of public and private institutions, with participants from eight Countries. Communication, dissemination, and visibility are addressed to maximise the impact of the project.

Benchmark CBRNDET capacities by an analytical round robin test

Improve public visibility of the UCPM through the international, national, and local media